St. Gregorios Mission is a sub unit of St. Thomas Mission; Bhilai. The main aim of the establishment of this mission is to propagate the message of love through action as recorded in the Gospel to our fellow people in the North East especially in West Bengal. Fr. Geevarghese Varghese serves as the Manager and Fr. Jacob John as the Vice President. St Gregorios Mission Center is located in the one acre land given on lease by Diocese of Calcutta at Thakurpukur, the southern fringe of the city.

Bishop Theodosius Memorial Free School, Kolkata inaugurated on 2nd Oct.2013 the first project of St. Thomas Mission that focus on deprived kids who are forced to live on the streets. At present the focus is on the kids who live on the streets of 19 Smith Lane (Park Street) near St. Thomas Orthodox Cathedral, Calcutta.  The children belong to the migrant families who are mostly from Bangladesh. Their parents work as rickshaw pullers or fruit sellers. The school functions at the premises of St. Thomas Cathedral. Through this project, we help about 35 children aged between 4-15 years, who are either dropped out of school, working or never enrolled in schools. The classes are conducted from 3pm to 6pm by two devoted teachers during who impart  basic education and lessons on hygiene and moral values .

Extending the field of the Mission  we could reach the visually impaired brothers of Calcutta & Siliguri. One day retreat was conducted for them at CNI Church during Christmas Season. They were also given, Blankets, clothes and food. They were also given automatic weighing machines which they could use to earn their income. The one day meet was conducted in association with the help of “Mission to the Blind” an organisation helping them for years.

Save A Child Project

St. Gregorios School, Thakur Pukur, started in the year 2007 by Calcutta Diocese provides  quality education at reasonable cost to children in the neighbourhood. Parents of  most of the students are struggling financially. Twenty Five such students have been taken up under ‘ Save A Child Project’ of St. Gregorios Mission. All the expenses for their studies are sponsored by Mission. This project is aided by  Kuwait Maha Edavaka Marth Mariam Samajam Members. We extend our sincere thanks to all the MMS members of Maha Edavaka.

In association with St. Gregorios School Kolkata, Mission had organized students’ campaign in spreading awareness about HIV/AIDS among the people residing Thakurpukur area. The campaign was on 1st December 2014, World AIDS Day, to create awareness about the symptoms, causes and preventive measures of HIV/AIDS that has taken unprecedented number of lives especially in Kolkata.

A rally was taken out by students wearing red ribbons , the symbol of solidarity and support towards the people living with HIV, and carrying placards with slogans such as ‘Stop AIDS, Keep the Promise’, ‘Getting Zero’, distributed leaflets about HIV/AIDS and red ribbons. 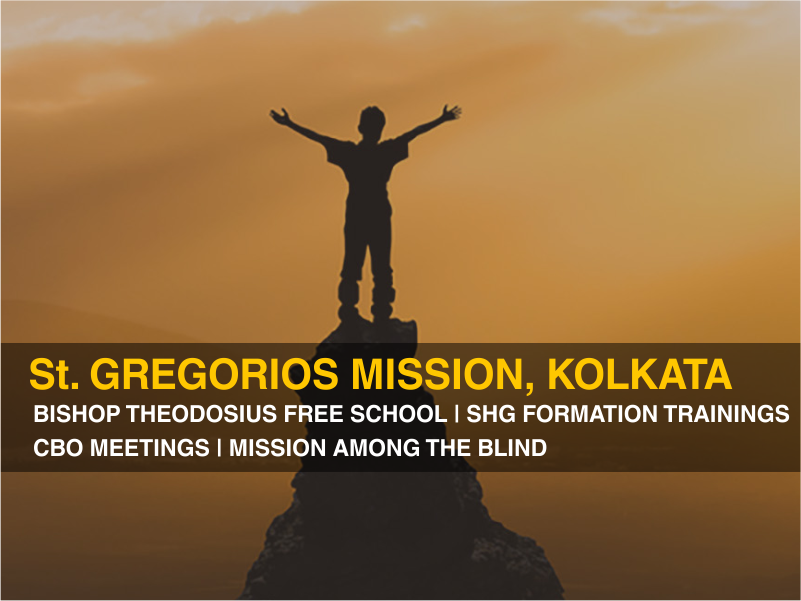 Today, the greatest single source of wealth is between your ears. Today, wealth is contained in brainpower, not brutepower
Brian Tracy
ANNADAAN